When bandwagons turn into bubbles

When bandwagons turn into bubbles

Quite often when an investment idea takes hold prices surge, then settle, and unmanly occasions fall before bottoming out and building again slowly.

We’ve seen it recently with equities, bonds, metals, minerals, oil and and collectables.

One of the best performing collectable sectors over recent years has been classic cars and automobile. Values surged as gold fell until 2015, and then started to fall back as the gold price improved. Coincidence? maybe.

Opinions differ according to the source, with Coutts suggesting in their Passion Index that prices have fallen, and Knight Frank’s Wealth Report indicating that the tide has turned.

The chart below from US insurer and researcher Hagerty seems to support the consensus, showing a fall of over 16 per cent from the highs to recent low. That is consistent with the drops in 2008 during the financial crisis. But the chart des show what appears to be a bottom and a return to growth. 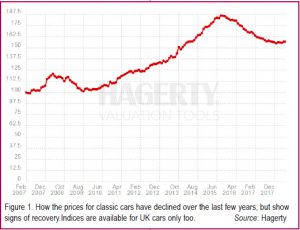 So was this a “bubble”, and has it burst?

Comparing other collectable prices with classic cars reveals that cars have been the hands down winner for returns over 10 years. Nothing else comes close.

Wine has followed a similar pattern of rise and fall a year or so ahead of cars. Other assets display similar characteristics, as though money were moving from one asset to the next sequentially. It may be that large sums are moved to the next rising star as the previous one wanes, but it’s hard to prove or demonstrate. And opinions as to what “the next big thing” actually is will differ, though the industry will have a feel and no doubt its clientele.

One of the possibly imperceptible factors in trend change is the attitude of buyers and sellers. Buyers become less enthusiastic, and sellers become just a little more eager to sell. This builds and escalates until prices appear reasonable once more. So investors will have held out for their prize, and some will have moved on to the next available asset class.

For well over a year the number of classic car owners that thought prices were rising has declined. But Hagerty’s June 2018 report suggests that has changed, and shows the biggest increase in positive opinion and optimism for over two years.

For most people it is just not practical to move funds from one asset class to another. These assets are mainly illiquid and costs to trade are high. So better to know perhaps that your chosen passion asset is likely to perform, or has a recent history of growth, that you can invest believing that its value should not recede while you take your enjoyment dividend from seeing and using it in the case of cars, watches or art, or from just owning it perhaps with coins or wine. 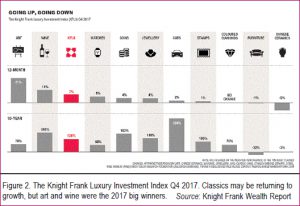 This scenario therefore appears much more cyclical in nature, more a corrective reaction to highs than the dramatic panic selling and price drops associated with a bubble.

That is not to say it can’t happen though.

Data from Coutts in their annual Passion Assets Index – Figure 3 – supports the view that wine and coins were better performers in the short term, but you’d still have been better off with a classic car over the longer term if you had the facilities to store and maintain it. 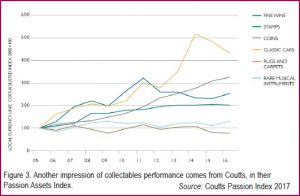 The volatile movement is at first suggestive of large buying and selling, but equally may be affected by small numbers and timing of events, there not being a fixed amount or number of assets available to sell, or opportunities to do so. One large sale being deferred may induce an up and down trend as seen with musical instruments for example.

Delving further into Hagerty’s data they reveal that prices for UK cars including Sunbeam Tigers, Jaguar E-Types and Triumph TR6’s have been key to halting and reversing the slide in index values.

But owning a classic does not have to be megabucks, and doesn’t even have to be a prestige mark.

Finding something that is rare, that has its own appeal to you, or a generation, could be enough.

One interesting place for data is the website HowManyLeft.co.uk, which allows you to search through cars alphabetically, find individual specifications, for example Ford Capri II Ghia, and discover that the one in the neighbours garage is one of only 12 registered, and that 19 have been SORN.

The historic data shows registrations have increased over time, suggesting that some serious renovation has been taking place. It shows how numbers licensed have declined and SORNs increased, and the fluctuation between them.

Key to any of these cars is that they don’t make them any more, so there will never be more than about 30 of the aforementioned Capri.

If you’re looking for a classic car this is a fantastic place to verify quite how rare your potential investment might be.

The headline index values are influenced by big spenders, and don’t reflect the reality of most classics. There was undoubtedly a rush to on the waggon when it was identified as an appreciating asset class, button really a bubble.

Prices can only really go up for average vintage and veteran cars. The super rare and desirable cars that we have dreamt of are more likely to experience serious price fluctuation depending on what is flavour of the month for super spenders.