Volatility makes 2018 the wildest ride for over ten years

Volatility makes 2018 the wildest ride for over ten years

After a sleepy 2017 where a pound invested added 15 per cent more or less regardless, 2018 has come as shock. We have just left behind the longest period without a five per cent pullback ever. Over 90 years. The return of the whipsaw has seen stop-loss and gain-lock activations result in much lower prices than expected, only for the price to be back up again – in many cases – within the same trading session.

But it would be nice to know why, and what can be done about it.

After a more than a year of uninterupted index rises any level of drop was a shock.

This analysis uses US markets, but the effects apply equally to UK equities. There is an old adage that when Wall Street catches a cold, the rest of the world sneezes. But many respected commentators have suggested that Wall Street has the flu, with consequention repercussions for global markets.

But even so, put in perspective it may not be a frightening as it looks.

Markets have been vulnerable to whipsaw action since people could trade first from their home  computers, and increasing since the smartphone – and more importantly 3G and 4G data connections – became widely available. So over and above planned stop levels, the panic induced selling by worried and inexperienced investors amplifies the problem.

Consider also the way news is reported still. “Dow Jones drops 600 points”, “Biggest ever one-day drop”. These headlines may have been OK twenty years ago, but now they are sensationalist and unqualified. Because the indices are so much higher that large point movements may well be within the percentage ranges expected and understood. Only on the financial news channels do you get any sort of further explanation.

But such falls, or pullbacks or ultimately correction presents great opportunity to buy good stocks at discounted prices.

And there have been some excellent examples recently of why the market was right and sellers were wrong. Boeing, Amazon, Microsoft and Neflix have all surpassed expected earnings. Sector wide, banking and restuarants have added impetus. technology has taken a beating in the correction, but the poistive earnings on sometimes absurdly low P/E ratios provides golden buying chances.

Correction was overdue and needed

There is no doubt that the major indices were over-expended, and that a correction was due. But when this happens the retreating tide takes all stocks with it; it’s largely not selective in its markdowns. 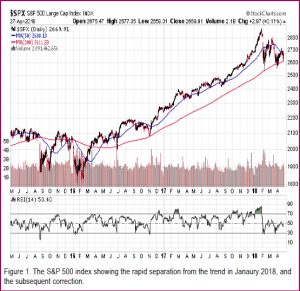 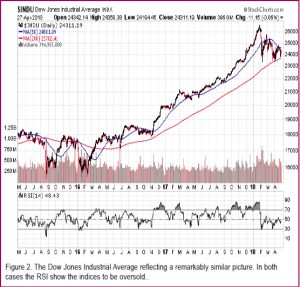 But look at the index charts for the S&P 500 and Dow Jones Industrial Average over three years. Both show how January 2018 had an extended trajectory, and that a pullback was inevitable. More importantly, where the correction has settled. The 200 day moving average became the base line, with prices not falling much below where they were in December 2017, less than five months previous.

What might be behind the change in direction? Earnings continue to support valuations, especially at corrected levels. Confidence in the global economy remains high, significantly in key markets of Europe, China nd North America. Chances of global conflict and the Twitter brinkmanship have vastly reduced, and look likely to retreat further. Inflation remains under control. But the threat of interest rate rises lurks.

It is the possible rate rises that may be wielding the biggest influence, with gilts and bonds getting more attractive IF rates rise, equities present too much risk for the return compared to the fixed interest alternatives.

The technical picture is the most interesting part. rarely do you get such clarity in a chart. In the two major US index charts the 200 DMA line is so clear it negates the need to add a trend line. The daily index values have fallen to the 200 DMA and stopped, on a few occasions. The more times it happens the more strength of the bottom is implied, and combined with the 200 DMA line the likelyhood is that this is the launch pad for the trend to continue. 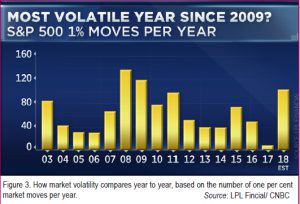 There is no guarantee that something may shock markets and they will go down further still. There are still the prickly subjects of trade wars and Syria that could yet throw in a proverbial spanner. But the emerging picture is of consolidation at what is already a level most investors would have settled for two or three years ago, or even just on eyaer ago. In 2015 markets did the same thing, but the conditions that could effect the outcome were not nearly as positive as they are today.

Many commentators hold opinion that this is a correction only. Fundamentals remain very strong. This is a case of volatility leading the market, not the market leading volatility.