The Chancellor announced his Spring Statement on the 13th March, a return to the format last seen from Norman Lamont in the early 1990s.

With the annual single fiscal announcement made in the autumn ahead of the year end, the Spring Statement has become an opportunity to update the numbers from the OBR, and report progress since the Budget speech in Novmber 2017.

It is also the opportunity to give a half-time boost to UK companies. But if the FTSE 100 rises after the event, dividend yields will fall, hitting the pockets of income investors.

The Chancellors speech was upbeat, but certainly was not the herald of Spring wanted by business.

The ONS says that the UK now has a surplus in its current budget – the day to day funding rather than longer-term investment – of nearly £4bn. The long term debt still remains high – over £1.8 trillion, equating to £65,000 per UK household; still far too high to withstand another fiscal shock.

The forecast for borrowing throughout 2018 was revised downwards, but not as low as trends had suggested. £45.2bn rather £49.9bn is an improvement, but not the £38.5bn expected by renowned thinktank the Resolution Foundation.

The UK is also near bottom of the G8 league for fiscal growth, though it was not as bad as predicted. Further upgrades to the outlook from the OBR may help, but don’t relieve the pressure on public services caught between the grip of austerity and a long and deep winter.

A stronger economy and higher tax receipts than were expected may provide – if they continue, says Mr Hammond – some additional help for struggling services later this year. The fear is some may not manage that long.

Austerity is ending, not ended.

Housebuilding received more attention, with the plan for £44bn of investment to provide 300,000 homes per year over five years centre of attention. The share prices of housebuilders – already good sources of dividends – did not react though. Perhaps it has been the same story for too long, of much talk and little real action.

Overall these numbers are all the right side of forecast, but not enough ahead to be meaningful with the uncertainty of Brexit.

The speech failed to excite the market, and for now at least income seekers should be able to find a return, despite the slowing of dividend growth.

Growth in dividend payments is still expected to be almost five per cent in 2018, but currency exchange may make it lower.

The UK was bottom of the global  league for dividend growth in 2017, significantly influenced by the weakness of sterling. Strengthening business conditions and share prices will mean that yields will fall for new investors looking at adopting a dividend income strategy.

In 2017 total global dividends surged in 7.7 per cent to an all time high on the back of strong growth and confidence in the economic outlook. 2018 is set to be higher still. 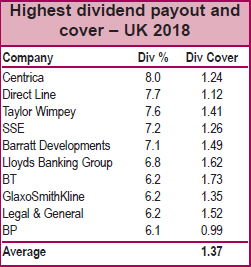 Dividend gems can still be found

The best returns came from Asia Pacific and Emerging markets, with Japan a distant third. These are the places dividend investors will need to start looking for a growing income stream.

The Janus Henderson Global Dividend Index report lists the top dividend regions and companies. Its contents offer some hope to those prepared to create their own portfolios, and it is still possible to find some joy in the FTSE indices. The mining sector is fast improving, offering selections such as Glencore, restoring its dividend last quarter, and Rio Tinto significantly increasing its return.

Another area may be life assurance, on the back of ageing population and the “advice gap” that will need to be filled. Legal & General has increased its payout by 15 per cent per annum over the last three years.

Looking at other areas where improvement has been forced upon industry, US banking may offer opportunity. Around the world banks have been made to remove risk from themselves, leaving many as bargains. 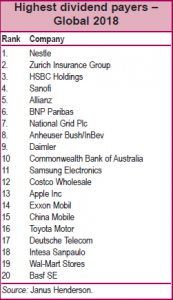 Around the world – see table above – unsurprisingly the same companies consistently fill the ranks of the top 20 dividend payers.

The Chancellor failed to deliver the motivation the City was looking for, and has maybe tried to save too much back “just in case” for Brexit, rather than break his new statement policy.

Brexit, and the uncertainty following has left sterling weak, and UK dividends still below par. But the Spring Statement didn’t set the market on a run, and so UK stocks paying reasonable dividends can still be found. And looking further afield should keep a steady income over what will be a turbulent year.