Home » SPI Investing Articles » How far is too far for diversity

How far is too far for diversity

By Sarah Newsome in SPI Investing Articles on October 31, 2018

How far is too far for diversity

As funds continue to tune and develop their offerings to make them more appealing, investors face a seemingly unending series of choices. Funds increasingly have more complex ethical considerations. Rightly so. But how far should they go?

There are already funds that consider the gender bias of their investments, some so far as to claim they are actively influencing gender diversity.

Back as far as 2009 the expression “gender lens investment” was used to describe investment that actively considered benefits to women. Some high profile funds include the Legal and General Investment Management’s Girl fund, the Valuers Feminines fund, managed by Caroline Grinda-Kalbacher; and the UBS ETF Global Gender Equality fund.

A 2015 report by McKinsey & Company supported the principle that funds should have a bias towards companies with diverse management, as a gender balance boosts performance.

Now investors and advisers, including at retail level, can use the extended gender lens concept to boost their returns.

A recent report revealed that the gender diversity of the management team actually makes a difference. In an environment where every tenth of a percentage point counts, this sort of information could add significantly to income returns.

In the third edition of the Alpha Female study, it is concluded that a fund management tram that is of mixed gender – as opposed to single gender teams or solo managers – will produce better returns, and do so while reducing overall risk compared to a male-only administration.

And the outperformance is not just at fund level, but at single asset class level too, with returns on equities, bonds and mixed asset portfolios run by mixed gender teams producing better total returns over three years.

They found that women-only managers or teams tended to have less risk, and the mixed tams balanced it out.

In a male denominated industry mixed teams can only encourage more women to become fund managers. It makes business sense too build a team with a mixture of skills and expertise, with gender diversity a huge windfall benefit.

What is perhaps more concerning is that this information has been presented as surprising, or a revelation. It must seem fairly obvious at headline level that a team with a balance in gender would make for a more balanced approach to investment.

Add that balance to a brand range of experience and ideas and it is more likely to produce a winning portfolio. 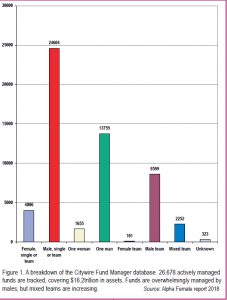 City based IFAs Holden & Partners’ say that their investment committee would not buy a fund purely on the fact it had a mixed or women-only investment team, but instead look for a management team with a relatively flat structure and diversity of opinions, providing more confidence in that team to manage a certain product.

But if there are more women on the team it shows willingness to be more diverse.

Some advisers don’t regard fund manager diversity in their investment criteria, but would consider that a combination of different views and opinions is always going to give you a more balance, rounded approach.

There is evidence also that more management groups are aware and responding to the fact that mixed teams produce better results, with a 14 per cent increase in funds managed by a mixed team since 2016. 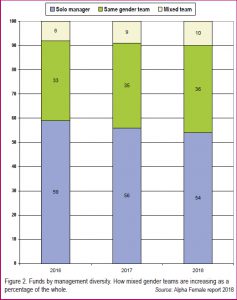 Opinions vary as why this is, but one suggests that men have had a longer history within financial services, and are biased towards short-termism and excessive risk. Women don’t have as long a history of thinking that way.

Performance demonstrates the benefits of diversity. Finding the right funds has become increasingly difficult with the increased complexity of selective criteria.

These additional ways to select – or deselect – the most suitable fund provide huge choice and more headache-bringing decisions. But it would appear on the evidence that finding funds that invest in companies with diversity within their culture, and fund managers that reflect those same values may be the next investing advantage.

Copyright secured by Digiprove © 2018
← When bandwagons turn into bubbles